Pope Francis to Grassroots Leaders: “We should be neither paralyzed by fear nor shackled within the conflict.” 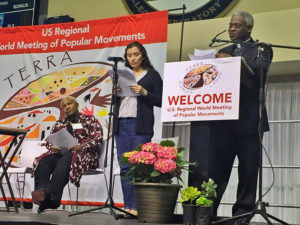 WASHINGTON – As nearly 700 faith and community leaders from 12 countries gather in Modesto, Ca. for the U.S. Regional World Meeting of Popular Movements (WMPM), the Vatican today released the following statement from Pope Francis. The Pope’s remarks are directed specifically to grassroots movement leaders working to address racism, migration and the economy of exclusion.

Organized by the Vatican’s Integral Human Development, the U.S. Conference of Catholic Bishops’, Catholic Campaign for Human Development and PICO National Network, the regional meeting is a follow-up to three larger international meetings held in Rome in Oct. 2014 and Nov. 2016 and Bolivia in July 2015. The purpose of the WMPM series is to deepen relationships between grassroots movements and the faith community.

For more information or to arrange interviews with WMPM attendees, please contact Jennifer Farmer at jfarmer@piconetwork.org or Heather Cabral at heather@westendstrategy.com.

First of all, I would like to congratulate you for your effort in replicating on a national level the work being developed in the World Meetings of Popular Movements. By way of this letter, I want to encourage and strengthen each one of you, your organizations, and all who strive with you for “Land, Work and Housing,” the three T’s in Spanish: Tierra, Trabajo y Techo. I congratulate you for all that you are doing.

I would like to thank the Catholic Campaign for Human Development, its chairman Bishop David Talley, and the host Bishops Stephen Blaire, Armando Ochoa and Jaime Soto, for the wholehearted support they have offered to this meeting. Thank you, Cardinal Peter Turkson, for your continued support of popular movements from the new Dicastery for the Promotion of Integral Human Development. It makes me very happy to see you working together towards social justice! How I wish that such constructive energy would spread to all dioceses, because it builds bridges between peoples and individuals. These are bridges that can overcome the walls of exclusion, indifference, racism, and intolerance.

I would also like to highlight the work done by the PICO National Network and the organizations promoting this meeting. I learned that PICO stands for “People Improving Communities through Organizing”. What a great synthesis of the mission of popular movements: to work locally, side by side with your neighbors, organizing among yourselves, to make your communities thrive.

A few months ago in Rome, we talked at the third World Meeting of Popular Movements about walls and fear, about bridges and love.[1] Without wanting to repeat myself, these issues do challenge our deepest values.

We know that none of these ills began yesterday. For some time, the crisis of the prevailing paradigm has confronted us. I am speaking of a system that causes enormous suffering to the human family, simultaneously assaulting people’s dignity and our Common Home in order to sustain the invisible tyranny of money that only guarantees the privileges of a few. “In our time humanity is experiencing a turning-point in its history.”[2]

As Christians and all people of good will, it is for us to live and act at this moment. It is “a grave responsibility, since certain present realities, unless effectively dealt with, are capable of setting off processes of dehumanization which would then be hard to reverse.”[3] These are signs of the times that we need to recognize in order to act. We have lost valuable time: time when we did not pay enough attention to these processes, time when we did not resolve these destructive realities. Thus the processes of dehumanization accelerate. The direction taken beyond this historic turning-point—the ways in which this worsening crisis gets resolved—will depend on people’s involvement and participation and, largely, on yourselves, the popular movements.

We should be neither paralyzed by fear nor shackled within the conflict. We have to acknowledge the danger but also the opportunity that every crisis brings in order to advance to a successful synthesis. In the Chinese language, which expresses the ancestral wisdom of that great people, the word “crisis” is comprised of two ideograms: Wēi, which represents “danger”, and Jī, which represents “opportunity”.

The grave danger is to disown our neighbors. When we do so, we deny their humanity and our own humanity without realizing it; we deny ourselves, and we deny the most important Commandments of Jesus. Herein lies the danger, the dehumanization. But here we also find an opportunity: that the light of the love of neighbor may illuminate the Earth with its stunning brightness like a lightning bolt in the dark; that it may wake us up and let true humanity burst through with authentic resistance, resilience and persistence.

The question that the lawyer asked Jesus in the Gospel of Luke (10:25-37) echoes in our ears today: “Who is my neighbor?” Who is that other whom we are to love as we love ourselves? Maybe the questioner expects a comfortable response in order to carry on with his life: “My relatives? My compatriots? My co-religionists? …” Maybe he wants Jesus to excuse us from the obligation of loving pagans or foreigners who at that time were considered unclean. This man wants a clear rule that allows him to classify others as “neighbor” and “non-neighbor”, as those who can become neighbors and those who cannot become neighbors.[4]

Jesus responds with a parable which features two figures belonging to the elite of the day and a third figure, considered a foreigner, a pagan and unclean: the Samaritan. On the road from Jerusalem to Jericho, the priest and the Levite come upon a dying man, whom robbers have attacked, stripped and abandoned. In such situations the Law of the Lord imposes the duty to offer assistance, but both pass by without stopping. They were in a hurry. However, unlike these elite figures, the Samaritan stopped. Why him? As a Samaritan he was looked down upon, no one would have counted on him, and in any case he would have had his own commitments and things to do—yet when he saw the injured man, he did not pass by like the other two who were linked to the Temple, but “he saw him and had compassion on him” (v. 33). The Samaritan acts with true mercy: he binds up the man’s wounds, transports him to an inn, personally takes care of him, and provides for his upkeep. All this teaches us that compassion, love, is not a vague sentiment, but rather means taking care of the other to the point of personally paying for him. It means committing oneself to take all the necessary steps so as to “draw near to” the other to the point of identifying with him: “You shall love your neighbor as yourself.” This is the Lord’s Commandment.[5]

The economic system that has the god of money at its center, and that sometimes acts with the brutality of the robbers in the parable, inflicts injuries that to a criminal degree have remained neglected. Globalized society frequently looks the other way with the pretense of innocence. Under the guise of what is politically correct or ideologically fashionable, one looks at those who suffer without touching them. But they are televised live; they are talked about in euphemisms and with apparent tolerance, but nothing is done systematically to heal the social wounds or to confront the structures that leave so many brothers and sisters by the wayside. This hypocritical attitude, so different from that of the Samaritan, manifests an absence of true commitment to humanity.

Sooner or later, the moral blindness of this indifference comes to light, like when a mirage dissipates. The wounds are there, they are a reality. The unemployment is real, the violence is real, the corruption is real, the identity crisis is real, the gutting of democracies is real. The system’s gangrene cannot be whitewashed forever because sooner or later the stench becomes too strong; and when it can no longer be denied, the same power that spawned this state of affairs sets about manipulating fear, insecurity, quarrels, and even people’s justified indignation, in order to shift the responsibility for all these ills onto a “non-neighbor”. I am not speaking of anyone in particular, I am speaking of a social and political process that flourishes in many parts of the world and poses a grave danger for humanity.

Jesus teaches us a different path. Do not classify others in order to see who is a neighbor and who is not. You can become neighbor to whomever you meet in need, and you will do so if you have compassion in your heart. That is to say, if you have that capacity to suffer with someone else. You must become a Samaritan. And then also become like the innkeeper at the end of the parable to whom the Samaritan entrusts the person who is suffering. Who is this innkeeper? It is the Church, the Christian community, people of compassion and solidarity, social organizations. It is us, it is you, to whom the Lord Jesus daily entrusts those who are afflicted in body and spirit, so that we can continue pouring out all of his immeasurable mercy and salvation upon them. Here are the roots of the authentic humanity that resists the dehumanization that wears the livery of indifference, hypocrisy, or intolerance.

I know that you have committed yourselves to fight for social justice, to defend our Sister Mother Earth and to stand alongside migrants. I want to reaffirm your choice and share two reflections in this regard.

First, the ecological crisis is real. “A very solid scientific consensus indicates that we are presently witnessing a disturbing warming of the climatic system.”[6] Science is not the only form of knowledge, it is true. It is also true that science is not necessarily “neutral”—many times it conceals ideological views or economic interests. However, we also know what happens when we deny science and disregard the voice of Nature. I make my own everything that concerns us as Catholics. Let us not fall into denial. Time is running out. Let us act. I ask you again—all of you, people of all backgrounds including native people, pastors, political leaders—to defend Creation.

The other is a reflection that I shared at our most recent World Meeting of Popular Movements, and I feel is important to say it again: no people is criminal and no religion is terrorist. Christian terrorism does not exist, Jewish terrorism does not exist, and Muslim terrorism does not exist. They do not exist. No people is criminal or drug-trafficking or violent. “The poor and the poorer peoples are accused of violence yet, without equal opportunities, the different forms of aggression and conflict will find a fertile terrain for growth and will eventually explode.”[7] There are fundamentalist and violent individuals in all peoples and religions—and with intolerant generalizations they become stronger because they feed on hate and xenophobia. By confronting terror with love, we work for peace.

Please know that I pray for you, that I pray with you, and I ask God our Father to accompany and bless you. May He shower you with his love and protect you. I ask you to please pray for me too, and to carry on.

Replace this widget content by going to Appearance / Widgets and dragging widgets into this widget area.

To remove or choose the number of footer widgets, go to Appearance / Customize / Layout / Footer Widgets.

Replace this widget content by going to Appearance / Widgets and dragging widgets into this widget area.

To remove or choose the number of footer widgets, go to Appearance / Customize / Layout / Footer Widgets.